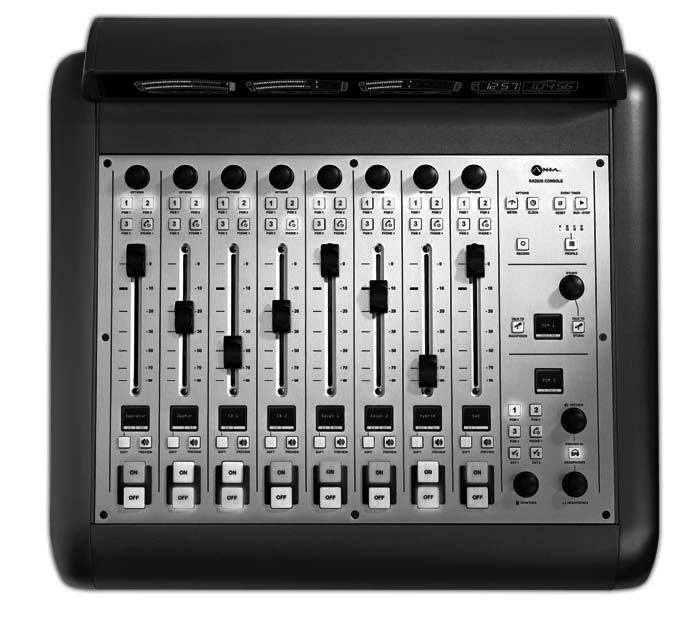 Everybody knows you get what you pay for. And sometimes, quite a bit less. Ever notice how “affordable” radio consoles are usually missing stuff? Important stuff. Trying to do a radio show with a board like that is like trying to open a can with a spoon: you might succeed eventually, but you sure won’t enjoy it. At Axia, we believe that having a reasonable equipment budget shouldn’t mean having to settle for a stripped-down, poorly built, featureless plastic excuse of a console. We’ve decided you should get more than you pay for — much more.

You can have it all.

Radius is the IP console that proves you can have your cake and eat it, too. Radius is the easiest AoIP console ever. Just connect the 8-fader mixing surface to the Radius Core (a sophisticated, integrated console engine), plug in sources and power, and you’re ready to make great radio! Radius features three stereo Program buses and a stereo utility bus that can be used for recording phone calls and off-air bits, or as a fourth Program bus. Radius generates automatic mix-minus for phone callers and remote talent, helping ensure seamless, error-free shows. Bright multi-segment LED meters are switchable between VU and PPM styles, and high-resolution OLED displays for each fader show source assignments, audio options and more. Show Profiles can be saved and recalled to instantly load frequently-used console configurations. Because it’s so compact, Radius is the perfect standalone console, but those Gigabit ports can connect to other studios too. Radius’ network gateway lets you load up to 12 audio sources from anywhere in your Livewire network, while sending up to 4 local streams back out to the net. Like all Axia consoles, Radius is built for long-lasting reliability, ready to stand up to anything your operators throw at it, with an EM-tight machined aluminum frame, silky-smooth conductive-plastic faders, aircraft-quality switches and rotary controls, and OLED high-rez displays on every fader. With all these features, you’d think that Radius would cost twice or even three times as much.