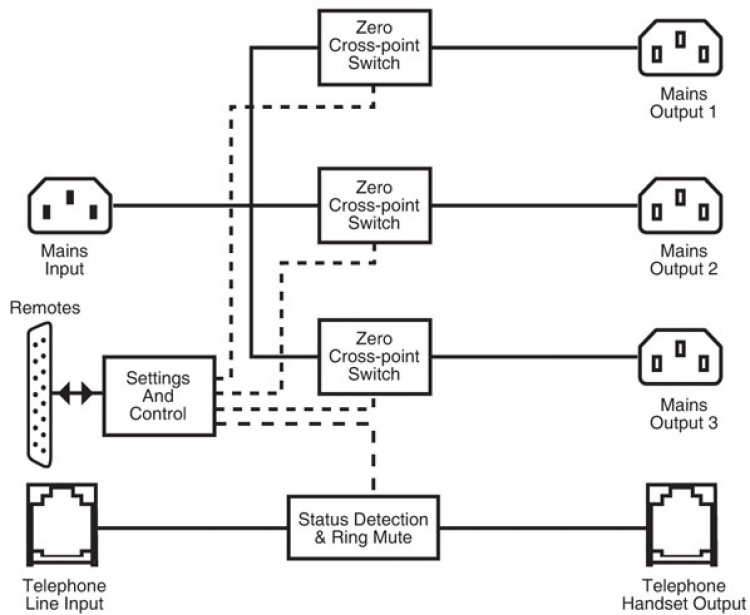 The RB-LC3 is a triple output switching unit for controlling external mains indicators, primarily studio status lights for broadcasting applications, such as On-Air, Mic-Live and Rehearsal/Live lights.
Each output can be individually controlled by one of three remote inputs (pulled high, or low), by a telephony input (when ringing, or off-hook, or both), or a combination of two inputs (to control two outputs, e.g. for Rehearsal/Live situations). The type of control is set using the 12 way DIP switch(4 switches for each output, allowing 16 different settings).

All connections are on the rear panel. > The three IEC outputs are controlled by zero-cross point drivers. When an output is activated, the A.C. voltage level at that output will be equal to the mains input voltage used to power the unit.

External control of the switched mains outputs is via the 15 way D-type plug connector. The telephone Line input and Handset output are via two RJ11-4 type connectors. The telephone connections are wired pin to pin from Line to Handset except when the remote Ring Mute control input is asserted. In this case the ring signal to the Handset is muted.

The status of the telephone line is continually monitored so that handset ringing and off-hook conditions can be indicated. A pre-set potentiometer on the rear panel controls the flash rate of the output when the appropriate mode is selected. Neon indicators on each power socket show the status of the mains output.